Related posts:
Best protest on trial by kit bakke list
10 best moses and the red sea book
Which are the best flight log book for drone pilots available in 2020?
How to buy the best step into reading books level 3?
The 10 best the enchanted forest chronicles boxed set 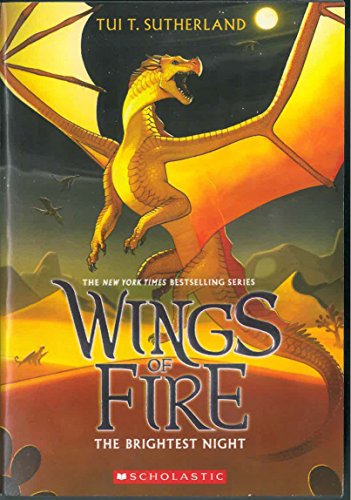 The dragonets struggle to fulfill the prophecy and -- somehow -- end the war in this thrilling new installment of the New York Times bestselling Wings of Fire series!

Sunny has always taken the Dragonet Prophecy very seriously. If Pyrrhia's dragons need her, Clay, Tsunami, Glory, and Starflight to end the war, she's ready to try. She even has some good ideas how to do it, if anyone would listen to her.

But shattering news from Morrowseer has shaken Sunny's faith in their destiny. Is it possible for anyone to end this terrible war and choose a new SandWing queen? What if everything they've been through was for nothing?

Buried secrets, deadly surprises, and an unexpected side to scavengers are all waiting for her in the shifting sands of the desert, where Sunny must decide once and for all: Is her destiny already written?

Or can five dragonets change their fate and save the world . . . the way they choose? 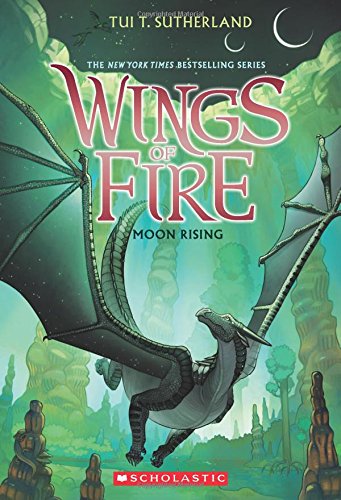 Peace has come to Pyrrhia... for now.

The war between the tribes is finally over, and now the dragonets of the prophecy have a plan for lasting peace: Jade Mountain Academy, a school that will gather dragonets from all the tribes and teach them to live together, perhaps even as friends.

Moonwatcher isn't sure how she feels about school, however. Hidden in the rainforest for most of her life, the young NightWing has an awful secret. She can read minds, and even see the future. Living in a cave with dozens of other dragons is noisy, exhausting -- and dangerous.

In just a few days, Moon finds herself overwhelmed by her secret powers and bombarded by strange thoughts, including those of a mysterious dragon who might be a terrible enemy. And when someone starts attacking dragons within the academy, Moon has a choice to make: Stay hidden and safe? Or risk everything to save her new friends? 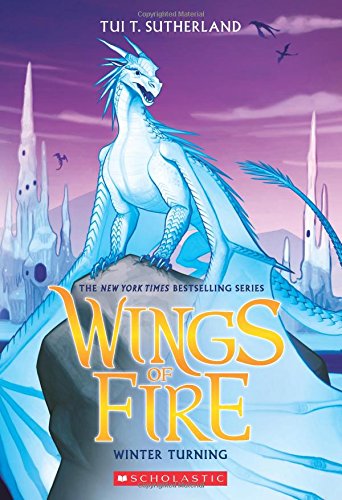 Winter has been a disappointment to his royal IceWing family his whole life. When his sister, Icicle, runs away from Jade Mountain Academy, fleeing terrible crimes and possibly planning to commit more, Winter knows that they both need a second chance to make things right -- if only he can find her.

Winters new clawmates, Moon, Qibli, and Kinkajou, wont let him make this dangerous journey alone. They dont seem to understand that IceWings, the most superior of all dragon tribes, can fix their own problems. When their search leads the dragonets straight into Queen Scarlets vicious talons, Winter is grateful to have some help. But even the bravest dragons cant follow him to the Ice Kingdom, where hell have to face the greatest threat of all: his own family. 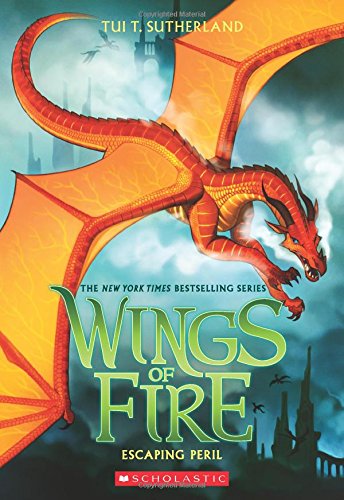 Peril has been loyal to Queen Scarlet, who used her fatal firescales to kill countless dragons in the SkyWing arena. Now, Peril is loyal to Clay, the only dragonet who has ever been her friend. So when Scarlet threatens Jade Mountain Academy, Peril sets off to find her former queen, stop her, and save the day, no matter what it takes.

There's just one problem: a strangely persistent SeaWing, Turtle, insists on coming along, too. Turtle is worried about his friends, who left to search for Scarlet and haven't returned. Peril is worried that she might accidentally burn Turtle -- or burn him on purpose, for being so annoying -- and frustrated that she keeps saying and doing the wrong things. She can't escape her firescales, and she can't escape her reputation as the deadliest dragon in Pyrrhia.

So when she's offered a chance to trade everything for a new life, Peril has to decide who she's really loyal to . . . and whether her own scales might actually be worth saving. 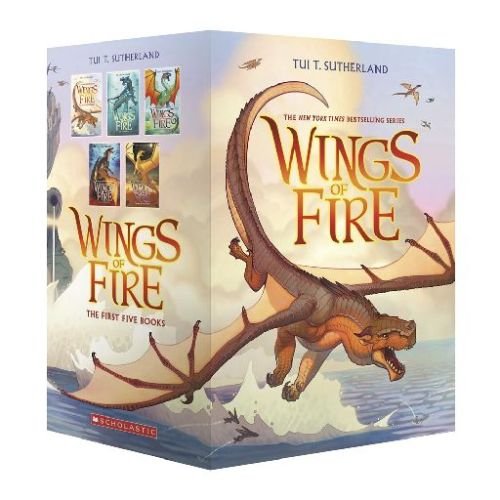 The New York Times bestselling Wings of Fire series is more collectible than ever in this five-book paperback boxed set!

A war has been raging between the dragon tribes of Pyrrhia for years. According to a prophecy, five dragonets will end the bloodshed and choose a new queen. But not every dragonet wants a destiny. And when Clay, Tsunami, Glory, Starflight, and Sunny discover the truth about their unusual, secret upbringing, they might choose freedom over fate -- and find a way to save their world in their own way.

Discover the first five thrilling installments in the bestselling Wings of Fire series, now in one red-hot boxed set: The Dragonet Prophecy;The Lost Heir; The Hidden Kingdom; The Dark Secret; and The Brightest Night. 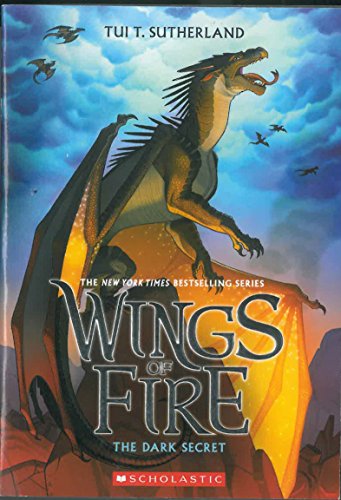 The New York Times bestselling Wings of Fire saga soars to the mysterious land of the NightWings, where Starflight must face a terrible choice -- his tribe, or his friends?

In the shadows, trouble is brewing. . .

The mysterious NightWings keep everything hidden, from their home and their queen to their allegiance in the war. Now they've kidnapped their own dragonet of destiny, and Starflight is finally meeting the rest of his tribe -- whether he wants to or not.

The NightWings have also kidnapped several innocent RainWings, now trapped in the dark, barren, miserable place that is the NightWing kingdom. Starflight wants to help the RainWings, but he's busy saving his own scales and trying to find a way back to his friends. The fate of two kingdoms rests in his talons, and with no one to save him, Starflight will have to find a way to be brave . . . before it's too late. 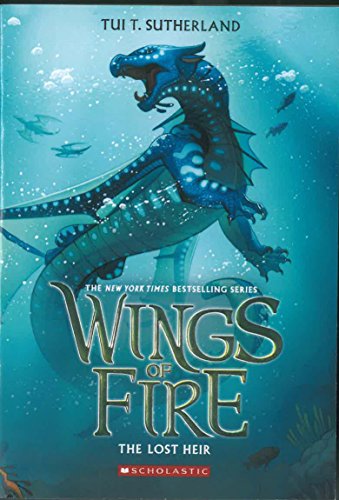 The Wings of Fire saga continues with a thrilling underwater adventure--and a mystery that will change everything!

The lost heir to the SeaWing throne is going home at last.

She can't believe it's finally happening. Tsunami and her fellow dragonets of destiny are journeying under the water to the great SeaWing Kingdom. Stolen as an egg from the royal hatchery, Tsunami is eager to meet her future subjects and reunite with her mother, Queen Coral.

But Tsunami's triumphant return doesn't go quite the way she imagined. Queen Coral welcomes her with open wings, but a mysterious assassin has been killing off the queen's heirs for years, and Tsunami may be the next target. The dragonets came to the SeaWings for protection, but this ocean hides secrets, betrayal--and perhaps even death. 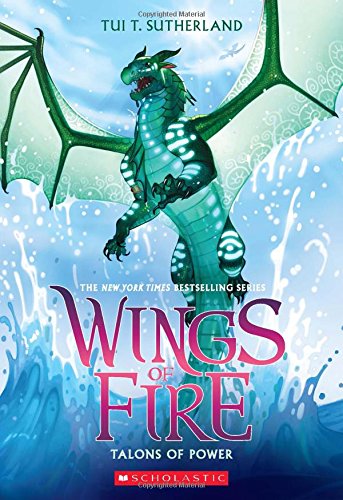 For every villain, there is a hero ...
Turtle isnt one of the heroes he reads about in stories. If he were, hed use his animus powers to help Pyrrhia -- instead of keeping his abilities a secret, even from his own sister. Now that Darkstalker, the sinister and impossibly old dragon from Pyrrhias most notorious legends, has returned, Turtle knows his own role is simple: hide. And stay hidden.
The more he watches Darkstalker from the shadows, the more Turtle knows that someone needs to stop the powerful dragon. A real hero. But Turtle is running out of time to find one, which means ... he might have to try to save the day himself. 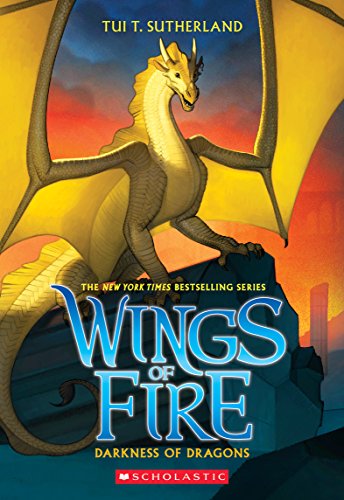 Qibli knows Darkstalker must be stopped. And he knows he could stop him -- if he had magic. With even a sliver of the ancient dragon's all-powerful scroll, Qibli could rewrite history the right way: end war forever; make every dragon happy; perhaps even cast a very small spell so that everyone would like him...

Instead, as Darkstalker's dangerous influence spreads across Pyrrhia, entrancing or killing every dragon in the seven tribes, Qibli can only grasp the small animus objects he's borrowed from Turtle. With some clever thinking, Qibli's talons finally hold the power to make a difference.

But prophecies are not easy to rewrite. Can Qibli be the magical force Pyrrhia needs, or will he be the one to bring Jade Mountain -- and his family, his friends, his whole world -- crashing down?

About the author May Murphy